Penny Taylor didn't want to believe the doping control results of Diana Taurasi, who is one of the best women basketball players in the world. Penny Taylor believes that she played an important role in Diana Taurasi's transfer (from Sparta&K to Fenerbahce) and when she learned that Diana had forbidden substances in her urine, she felt responsible for that.

In the Caferağa Arena, after the game between Fenerbahçe and Beşiktaş CT, the staff responsible for the doping control randomly chose Penny's name for her to give (urine) samples but she refused to be tested.

The managers and directors of Fenerbahçe reminded her a couple of times that unless she took the test, she would have a fine. Finally our managers convinced her; but she wanted her test to be made in a laboratory in Köln, Germany. This situation was shared with the Turkish Basketball Federation and then she agreed to give a sample which was sent to the laboratory in Köln.

Penny Taylor thought that Diana Taurasi, who has played alongside her in the WNBA for the Phoenix Mercury, received unwarranted actions and judged unfairly. She thought that the same could happen to her, which is why she didn't want to go to the away game against Botaş and she decided to end her Fenerbahçe career.

One more time our directors and managers convinced her and she agreed to go to the away game against Botaş. After this game, although the Australian player played against Lotos Gdynia in the EuroLeague game on Thursday 13th January 2011, without any justified reason she didn't attend the practice on Monday 17 January and returned to the USA. 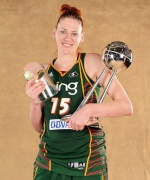